When someone talks about smartwatches, Apple always comes to mind. Apple has dominated the smartwatch domain since its first launch. It’s still Apple smartwatch vs. the world. Every smartwatch that hits the market compares to Apple’s watch. Like last year this time we have a new round. Apple launched in September the Apple Watch Series 6.

Apple is well known for making small, gradual, and incremental upgrades to all its products. The same applies to their smartwatches. Five years ago, the Apple Watch was introduced, and we can confidently say that it has reached maturity. All the changes are minute and refinements to the watch.

In this article, we’ll dive deeply and get a closer look at the Apple Watch Series 6 itself and its increments. Let’s get into it.

Unboxing the Apple Watch series 6, you’ll find the wall adapter missing. Only the watch, band, and charging cable come in the box. Typically, Apple, saving costs by leaving out a handy tool.

You don’t recognize any changes by looking at the smartwatch. The Apple Watch Series 6 is the same size and has the same materials as its predecessor. The Series 6 comes in graphite, blue, product red, and gold. 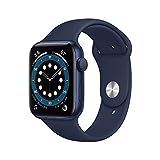 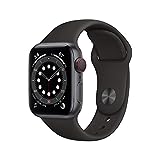 The always-on feature was missing up until series 5. You will quickly notice series 5. These features continue in series 6 as well. The transition from always-on display to bright mode is seamless when moving your wrist. But this feature is common in both series 5 and 6, so what exactly is the difference?

It’s a hassle using your smartwatch in bright sunlight. The glare dims down the display, making It harder to see. Apple improved it with Series 6. Apple watches series 6 is 2.5 times brighter than its predecessor. The brightness makes it easier to view your watch even on a bright sunny day. Apple says, “making it much easier to see a watch face in bright sunlight.”

Apple Watch series 6 comes with the latest S6 processor, a dual-core chip based on the A13 Bionic chip. Apple claims the processor is up to 20 times faster than the chip found in series 5. However, you won’t really notice a difference. Apps launch up to 20 times speedier. One more thing, improved efficiency of the S6 chip allows the always-on display to be two times brighter than series 5.

The new S6 chip has no impact to the battery life. It’s still 18 hours.

According to iFixit, series 6 has a larger battery compared to series 4. The battery life does not increase, which isn’t so bad. Since the display is brighter and always has on display. The watch is rated 18 hours, but you could get 1.5 or even two full days with average use. The charging speed is also improved. You’ll get a 100% charge from 0% in about an hour and a half.

Series 6 comes with the new blood oxygen sensor. Blood pressure would have been very cool, but this will suffice for now. The sensor uses infrared lights to measure the color to determine the percentage of oxygen in your blood. Covid-19 is a pulmonary disease, which means it affects your breathing. With the outbreak of Covid-19, this feature can prove useful. It isn’t a gimmick.

It’s incredible what a small watch can do. The sensor is not medically approved, but you still get a blood oxygen sensor on your watch. The ability to measure O2 saturation in your blood with a watch is just incredible.

A new sensor comes baked into the series 6, the altimeter. The sensor uses barometric air pressure to determine your elevation levels. A welcome improvement for people who like to hike or skydive.

If you’re someone who unlocks their MacBook using your watch, you’ll know that there is sometimes a small delay, or sometimes it doesn’t work. This problem is solved with series 6. Now you can unlock your MacBook faster. The process is almost instantaneous, with little to no lag.

Apple has introduced two new solo loop bands that are classless. It’s a single giant rubber band that wraps comfortably around your wrist. The solo loop bands are easy to take on and off and provide more comfort than clasp bands. Be careful when choosing the right size of these solo loop bands. They have to be perfect size. If they’re too loose, the watch will bounce on your wrist. If it’s too tight, the bands will dig into your skin, making the experience uncomfortable. There are two variants: a braided solo loop and a silicone solo loop.

Like we talked before, Apple is making small granular changes and tweaks to its watch line up. It has massive potential and can do numerous things with the watch. Apple can come out with a new shape. Maybe a rounder version in the next Apple Watch series. The watch faces are restricted and are limited. Apple can create an open-source app to create and share new watch faces.

Should you buy the smartwatch?

If you never loved the Apple Watch, the new series 6 won’t change your mind. Have you used Apple watches before, you’ll still love this. If you’re interested in the neat features we just discussed above, you should go ahead and order one for yourself!

Without a doubt, the Apple Watch Series 6 is an expensive smartwatch, even if you buy the cheapest option. You get a powerful smartwatch with the dozens of things the Apple Watch does so well. It’s also a piece of jewelry.

That’s all you need to know about the new Apple Watch Series 6.

See an overview of the best smartwatches here.

Check out my other blogs here.

Any purchases made from clicks on links to products on this page may result in an affiliate commission for me.

Edysdeals.com (Edy Werder) is a participant in the Amazon Services LLC Associates Program, an affiliate advertising program designed to provide a means for sites to earn advertising fees by advertising and linking to Amazon.com.